The Convention of the Unconventional: A road trip from Mangalore to Goa. 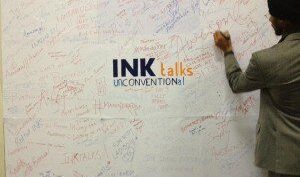 “Living life in a continuous state of beta” – that’s exactly what INKsters do. From the 23rd to the 25th of August, INK toured three colleges along the west coast of India with people from all walks of life, having in common the fact that they believed in themselves, broke away from conventions, paved their own way, and left their mark in the world.

Unconventional does not necessarily mean defying customs, breaking rules or undermining ideals, but forging your own beliefs and ideals that will reflect you – your story, your idea and your uniqueness.


The journey kicks off with a rush of adrenaline as the boarding crew at Bengaluru Airport makes a final call for the INK team and speakers – and off we go for a three-day tour starting at NITK Surathkal, where we were welcomed by student entrepreneurship cell E-FOREA .

Lunch was an excellent occasion for INK speakers and NITK students to interact and exchange ideas before retreating to preparatory activities for the event. As the time of the event neared, the excitement of the attendees outside the auditorium became more and more palpable.

The first stop on the Unconventional tour takes place in an electric atmosphere as speakers Anupam Mukerji, Krushnaa Patil, Virender Sangwan, Vivek Nair make NITKians chuckle with their unabashed audacity in pursuing their dreams despite difficulties encountered, while Charles Ma mesmerises the audience with an energetic Bharatnatyam performance.

The day ends with vivid exchanges between NITKians and the speakers, accompanied by a feeling of euphoria after the success of the first event in line. But the yellow Manipal University bus is already here!

The smell of the sea lingered along the short trip to Manipal University, where we arrived during the night. Minds set into fireworks by the day’s event, our speakers stayed up late chatting and discussing.

The following morning, we were welcomed by Dr K. Ramanarayan, VC of Manipal University, with whom we had an enriching discussion about going beyond the boundaries of learning to find creativity, a subject he is passionate about.

We then embarked on a virtual tour through the “Experience Theatre”– a sensorial treat engaging us through the vision which has influenced the entire history of Manipal University. Then followed an IRL tour of the campus, giving us a glimpse of how Manipalites maintain a sense of balance throughout their studies.

The event in the afternoon was carried by a tantalising energy driven by the passion of the speakers who went head first into the pursuit of what they believed in, starting to experiment in the backyard of a hostel like Vivek Nair did, and making success truly a journey by the continuous process of creation Anupam Mukerji delves in everyday.

An early start marked the last day on the Unconventional road trip as we set out at 4.30 a.m. on a long trip to Goa. Upon arrival at the campus at BITS Pilani Goa, we entered a fast-paced preparation for the last event in the auditorium, where we were pleasantly surprised by the creative stage set-up.

The audience at BITS Pilani Goa, heated up by the Q&A session (organised by “Spark the Rise”) proved to be very expressive and reactive. Indeed, it is hard not to give in to the humour-infused talks of our speakers who look back on the tussles of the unconventional destinies they are fulfilling by the force of their will. The performance of Joi Barua, award-winning music composer, was greeted with magic – the audience waved their screen-lit phones along with the tune.

“What is the one thing necessary for success?” asked INK curator Lakshmi Pratury, her surprising answer to this existential question being : Failure. Daring to go beyond the shackles of convention liberates our potential and allows our creativity to flow and prosper. And this is why we need a convention for the unconventional.