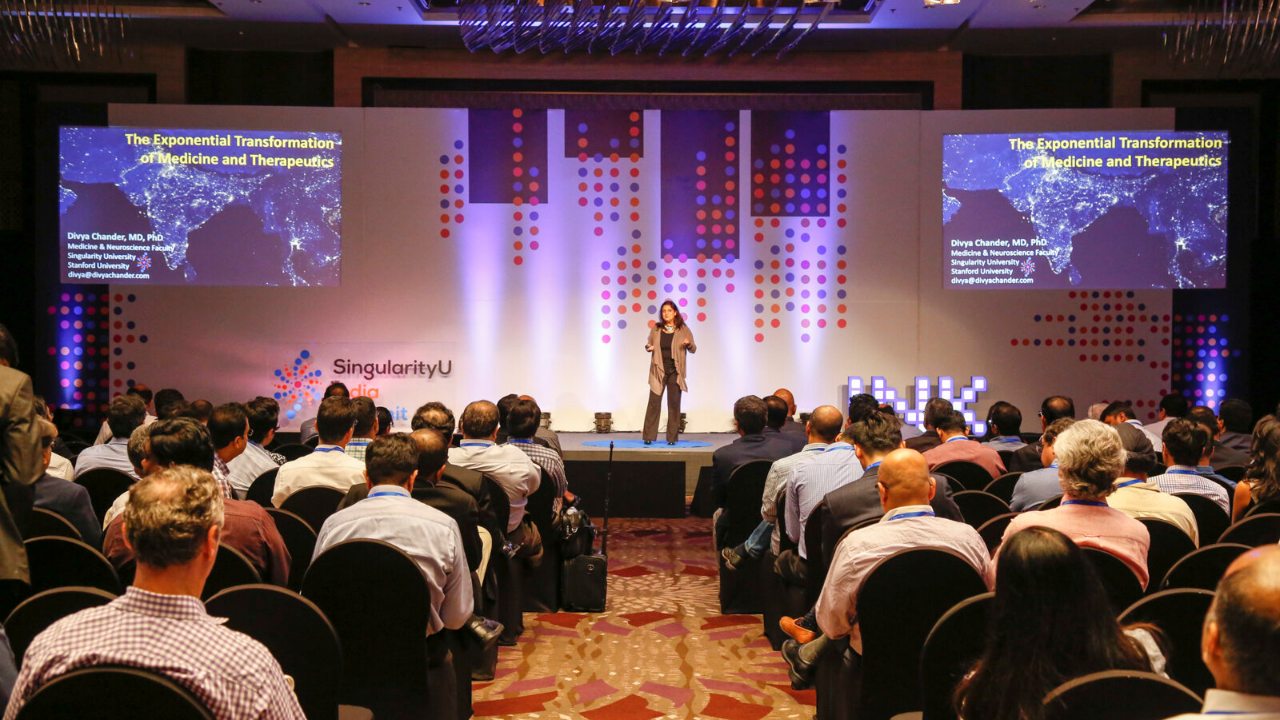 The next 50 years or so is exciting time for us human beings! To take us through the latest and greatest in the fields of gene therapeutics, the future of health, exponential medicine and personalized biology, we had two passionate speakers from Singularity University regale us with their mind-blowing talks.

Technologies that push us into the future and  reanimate our bodies

Faculty of Medicine at Singularity University Divya Chander gave us a thorough look into the kinds of research and innovations happening today in the areas of neuroscience, cell biology, stem cells, tissue engineering and gene editing.

“The ultimate goal of tissue engineering is to finally build an implantable, viable organ”

“Its all about democratization of the technology we develop, protecting who we are and our health information. To those who are privileged and have access, let me ask you, where will you invest?”

Chair, Biotechnology and Bioinformatics at Singularity University Raymond McCauley zeroed in on DNA sequencing and gave us a big picture of how it can be 5 years down the line.

Starting off with talking about how a company called 23andme offers DNA genetic testing, Raymond tells us that these days, genomics is so advanced that people can quite simply figure out what their risk for diseases are in the future or if they are carriers of any hereditary diseases or faulty metabolism traits. “Drag and drop engineering” is a new form of software and genetics, where a protein called crispr/cas 9, can be used to cut and splice DNA and put it in new place on the gene.

Referring to the famed “Human Genome Project” of 2001, when an entire human genome was sequenced for the first ever time, he talks about cost vs discovery. “In 2001, the HGP cost 3 billion dollars. In 2007, the cost of sequencing a genome was a billion dollars. In 2013, it was the price of a used car while in 2015, it was down to a thousand dollars (the cost of chest xray). In 2018, the price would be equal to that of a delivery pizza while in 2022, it would be more expensive to flush a toilet!”

Near- future medicine is fast going from being reactive to predictive, if we take the example of pharmacogenomics, where scientists can predict efficacy of drugs. Stepping away from the human body, biodefense is also a huge application. Governments have started testing for bio-terrorist agents by setting up carts in the city that detect levels of biohazardous substances in the air.

In one of the lighter moments of the talk, Raymond touched on industrial microbiology advances and narrated a funny story of a company called Bolt Threads, who created the world’s first spider silk tie (harnessing the proteins found in spider silk thread) and gifted the first of 50 to Stan Lee, the creator of Spiderman!

A self-described ‘biohacker’ at heart, Raymond talks about “BioCurious – Silicon Valley’s Hackerspace for Biotech“, his hackerspace to support DIY Biotechnology.

Like Divya, he brought the focus back to India towards the end of his talk and outlined the country’s potential for medical tourism, which in 2018, will have a market value of 8 billion.

“The future for us, in this space, is to teach kids biohacking so that they can cure diseases and support us in our ripe old age”