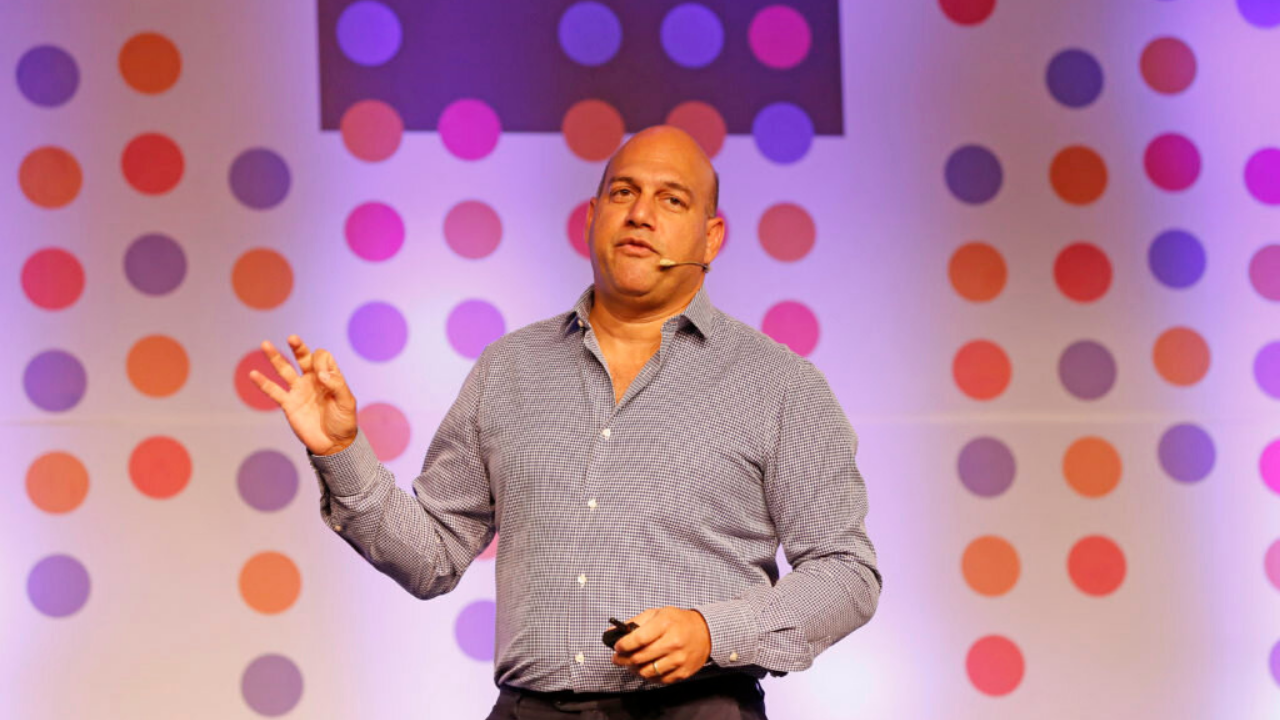 Salim Ismail, (Ex-Vice President, Yahoo!; Board Member – XPRIZE; Founding Director – Singularity University) delivered quite possibly the most gripping session on macro-trends in exponential technologies! Sourcing heavily from his bestselling book Exponential Organizations (first published in 2014), Salim really laid out the case for the human civilization: exponential disruption is real, and society is just not ready for it.

Comparing the resistance to change prevalent in each organization to the immune system of an organism, Salim rightly points out the rapid response to take down any proposed change! This resistance can come from different corners of any organization, and can be overwhelming even for the best leaders. Adaptation to industry-wide changes cannot follow such intra-organizational resistance.

But the first step to adaptation is identification. Spotting the exponential changes early is absolutely essential. “Even the average Google engineer is unaware of most changes happening in allied fields, let alone seemingly ‘distant’ disruption.”

Most importantly, the world is experiencing a shift from Pure Information-based disruption, evidenced in the business models of Twitter, Facebook, or LinkedIn, to Information-Physical systems, such as the ones proposed through the many physical-digital product lines of Amazon (Alexa; Kindle) and Apple (iPhone-iOS).

The most profound disruption will occur in in the Physical Information Systems, most visible in the revolutionary products of Tesla Motors. “A friend of mine called it a ‘Computer with Wheels’, since it is overly dominant on the processing infrastructure imbibed in each car model. But he was corrected by another friend stating how it is actually an ‘App with Wheels’ noting how software updates and firmware changes exhibit the cars’ behavior to be similar to an operating system’s application! Our understanding of structures such as these is limited. Did you ever imagine Tesla as a car company? Or Uber as a transportation company? You are laughably off the understanding of disruptive companies.”

Society is just not ready and is ill-equipped

“Traditional business models thrived on the existence of ‘scarcity’, and not on ‘abundance’. What would an organization do when its marginal cost is zero?” asked Salim, stating how in the digital age, the costs of copying software or similar products is virtually zero.

The classic case of ‘The Fall of the Eastman Kodak Company’ is one that he highlights yet again, showing how the company planned for solutions in a ‘Scarcity-driven Problem Space’, not one driven by ‘Abundance’. It could not cope adequately, and thus filed for bankruptcy in 2012.

To think of it, the invention of the Printing Press in 1440 A.D. was a revolution so great, it transformed Western civilization. “Today, society is experiencing roughly ‘twenty’ such changes at the same time! We have Artificial Intelligence, Energy, Medicine, Space Flight, Materials Science, and so many more fields experiencing complete revolution. We are just not ready.”

“We are already seeing expressions of this lack of readiness through the ‘Revolt of the Luddites’. Most visibly, movements such as ‘Brexit’ as well as the election of Donald Trump in the United States of America are obvious rejections of such a rapid expansion of technologies. Even Fundamentalist Revolutions, such as the one observed in the Middle East or even the gradual revival of Hindu Nationalism could all be seen in a similar vein”, he quipped. “Some reports said the Syrian Crisis, even the rise of ISIS as stark as it may sound, can be attributed to 7+ years of global warming that led to decreased resource availability in Syria and parts of the Middle East.”

Do we have the political will and structures to shape these changes for the good? “Democracy as a form of government is just too short-sighted to adapt to these changes, focusing incessantly on re-election agendas. In fact, ‘Representative Democracies’ are quite simply not ready for a ‘TRILLION’ sensors. Most experts did not anticipate 50 billion sensors by 2020; they now wake up to the reality that there may be as many as 500 billion sensors at an even earlier date!”

What about social constructs? How equipped is society to alter their understanding of current social institutions?

“Look at the concept of ‘marriage’. As an institution, our understanding earlier was simple: you attain reproductive age, you get married, you have some kids, and in a few years…you DIE!”, he remarks to an audience that is visibly in splits. “This was a robust institution in an era when life expectancy was much lower. But, if we double life spans sometime in this century, will you live with the same person for a ‘hundred years’?!”, he jokes, pointing out an important question on our old-school understanding.

No Industry or Sector will be spared

Around eight to nine years ago, all the sensors in Google’s autonomous car project cost upwards of $200,000. “Automotive companies laughed at them, calling this project a ‘cute project to waste time and money’.”

Then, in another two to three years, prices dropped by half. And then by half again! But even at $50,000, companies laughed at its economics.

“Today, those same sensors cost $1,000. Google can choose to laugh now, but they understand the vast improvements yet to come. The car companies? They are not laughing anymore, of course.”

When asked on the future of transportation and car companies, he surmised a single quote: “How do you prepare to sell a car in the future when my children’s generation may never even get a driving license? They have Uber now, they will have Hyperloop soon. There is no end to these knowledge-gaps in current thinking.”

Critics keep pointing at the simplistic application of disruption in all industries. Construction, for instance, is just one of the legacy sectors that they think cannot be disrupted.

“Every four years, construction booms in the world market, due to an important sporting event that comes along – FIFA World Cup, The Olympics, and so on”, he remarks.

“Not in Rio, in 2012. The Rio 2016 Olympic Games partnered with ‘Airbnb’ to be the event’s alternative accommodation services supplier. This was a landmark disruptive move, as it hurt portions of the expected ‘real estate boom’, that was seemingly understood to be disruption-free.

Organizations, both Business and Governmental, can adapt to change

There is some good news for existing organizations. There are ways in which we can adapt to these radical changes.

“There are three essentials to an ‘Exponential Organization’:
(1) M.T.P. – a Massive Transformative Purpose
(2) S.C.A.L.E. – an acronym for external characteristics
(3) I.D.E.A.S. – a term for a firm’s internal attributes

Leveraged Assets, the ‘L’ in ‘SCALE’ is an important concept, with most assets not being owned anymore, but being leased or rented. Airbnb, Uber, Tesla, are just a few of the companies that either recognize this or base their entire business models on this characteristic.

Ultimately, the example that is most striking is that of Walmart. The world’s largest company by revenue generation, and the world’s largest employer, also possessed the gold standard of inventory systems in the early 2000s. Regardless, internal company executives foresaw the rise of Amazon in the digital marketplace and suggested drastic revisions of the business processes and strategy.

“Walmart’s A-grade project-team went through 18 months of brainstorming and planning before the team was killed by the company’s ‘immune system’. They again tried, and were again killed in over an year. The third attempt at change was more radical, when they were kept aloof from the company’s core businesses to prevent premature closure. But this time, the project-team was brought into the core business prematurely and they failed, yet again! It was a remarkable, unprecedented fourth attempt that kick-started Walmart’s digital foray. But by then, Amazon was flush with success.”

In era of disruptive change, the message is simple: change is happening, and it is happening now! Disruption is inevitable, and is already under way in sectors. The best way to resist disruption is to adopt disruption. There are formulaic steps to adapt, as highlighted in Salim’s book as well as in this talk, but an organization need only steer clear of its ‘immune system’ long enough to survive. Even thrive.