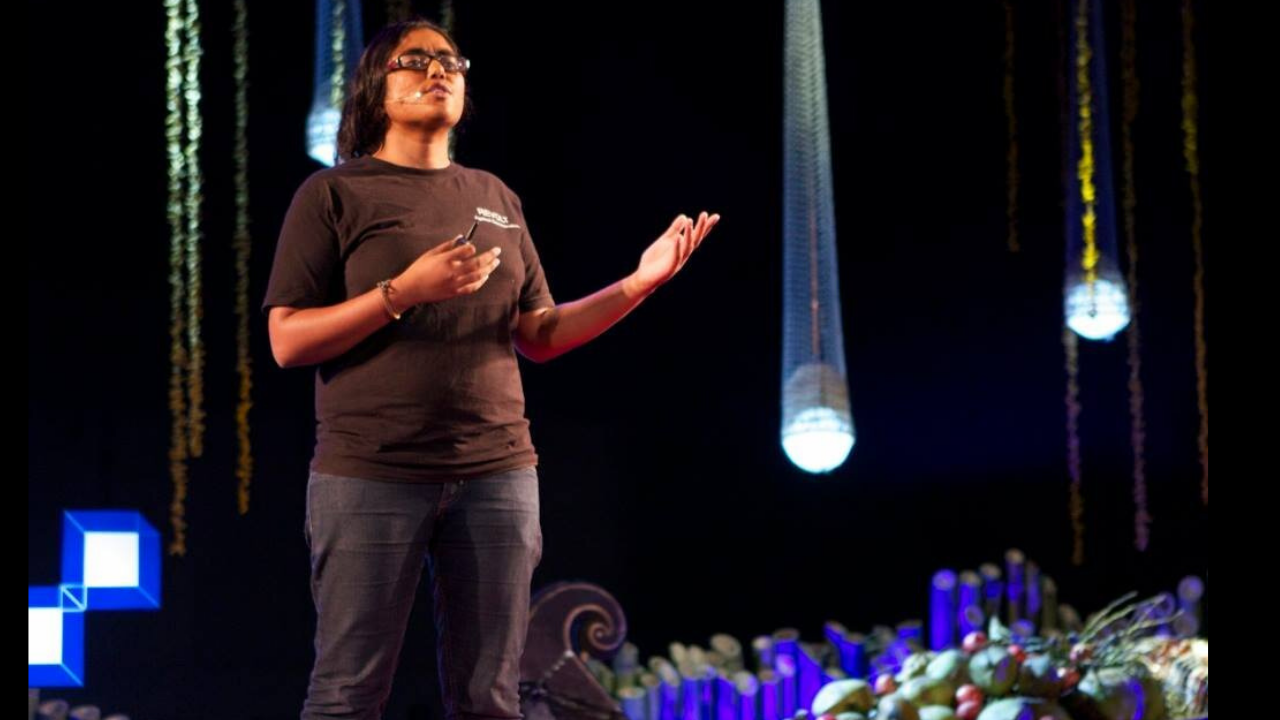 This session was all about going back to our roots and seeing things in a radically different way.
The second day of INK2013 started with an incredibly moving and inspiring presentation by Robin Chaurasiya, the founder of an NGO that works to empower girls in Mumbai’s red-light areas. This organization, Kranti, came about after Robin was kicked out of the US Air Force for being a lesbian and dedicated herself to repealing the US poicy of Don’t Ask, Don’t Tell. She saw the fruits of her labor pay off when DADT was repealed 6 months after her discharge from the Air-Force. Her radical journey then took her to Mumbai, where she founded Kranti to give girls from unimaginable backgrounds the tools to challenger perceptions of female power, sexuality, and leadership. Robin posed a series of “what if” questions to engage the audience in a challenging conversation. She explained that every marginalized person has an added ability to lead because of the obstacles they face and overcome. She ended her talk by asking, “Are we really ready for equality?”

What happens when your genes make it impossible to stop the bleeding from even a minor cut? The next speaker, Rehka Prameswaran, spoke to a captivated audience about not only the science of blood disorders, but also the interesting and unexpected impact it has had on historical and political events. Rehka began by explaining how she came to be interested in blood disorders; during a conference on hemophilia and other blood disorders, she met a doctor who had lost a leg due to hemophilia. Rehka was inspired by the determination to ensure that everyone had access to care, regardless of his or her ability to pay. She threw herself into the study of hemophilia, and demonstrated for the audience how the disorder had a large impact on European history and politics. She concluded her captivating journey through history by looking toward the future; she revealed that a virus may in fact be cure for this genetic disorder.

Next up was Isha Sharvani, the breathtakingly talented dancer. She sat down with Lakshmi for a conversation about her journey in dance and her career aspirations. As a child, Isha was not particularly interested in serious dance, despite her rich family history in the art of dance. When she was around 13, she wanted to start traveling with her parents on tour, and decided to leave school and begin studying dance seriously. Isha is still very connected to her roots at her mother’s dance school. She discussed her fame in Bollywood, and revealed that she has just signed on to a new film, which will start filming in January. We cannot wait to see what she does next!

William Pennel Rock a social anthropologist started off with a thought experiment to give the audience an understanding about ‘atma’, which means “itself”. He spoke about people who continue searching for their calling even though that have everything because it wasnt ‘it’ – just like Gautama, who experienced the same feeling and went in search of the answer to life and eventually attained liberation. Hence, William Pennel Rock felt compelled to do the same thing, and he traveled to India because if its rich diversity of culture and religions. His background in philosophy helped him to understand the ‘Upanishads’, which question what we are in, known as ‘that’, and what we should do to align ourselves to ‘that’ in an attempt to attain complete consciousness and truth. He stated that ultimately, all religions are about pursing the same thing- truth, though it is known by many names throughout religions. According to William Pennell Rock, success lays within attaining this conscious awareness. He went on to explain that in achieving this, ‘you are radical’. However, he says that we can be distracted by the emptiness we feel that can only be solved when we align our core being with that of the universe. We feel compelled to fill that emptiness with money and other material pursuits, rather than what really matters. After various inspiring and humbling experiences, he founded Origins, an organization that aims to help everyone find their inner hero.

Anirudh Sharma was watching a TED talk during class when he realized he was more stimulated by the talk than the class. He stumbled upon a presentation by Jeff Han, which was very progressive- especially in a world before smart phones and ipads. Anirudh’s latest venture is Le Chal- a new software that allows the visually impaired to know which direction they should be walking in by vibrations from their shoes. After the success of the product he claimed, “I am not a businessman, I am a chronic inventor”, so he has moved on from Le Chal and over to the MIT Media Lab. Once there he began working on a ruler that allows designers and students alike to see real-time feedback from the ruler and their drawings: shapes are transformed into physics simulations. He is also working on a project that captures soot from air pollution and turns it into ink. He demonstrated the project for the audience, and explained his vision of being able to turn a 10km car drive into a full ink cartridge.

Next, the brilliant artist and INK family member, Raghava KK took a moment to thank all of INK’s incredible Fellows. Their ability to collaborate and create together is truly inspiring to see.

After acknowledging our Fellows, Rohan Dixit, the founder of Brainbot, discussed the connection between cybernetics and the Buddha. He explained that through new technology, one sense can now be mapped onto another, and additional senses can be mapped onto existing ones.. He then brought this idea to the Buddha, sharing his desire to map how the brain works during meditation. Rohan mapped the brainwaves of meditating monks and, using that data, created technology to create a program that trains people’s brains to return to a meditative state through music, thus making the user a “cybernetic Buddha”. Rohan then shared stories of “cyborgs”, people who have altered their bodies with cybernetics to be able to interact with their surroundings in a different way. One example of a cyborg is someone who had a magnet place in the tip of their finger-suddenly they were aware of and able to interact with magnetic fields. Rohan’s vision of combining the cybernetic with the meditative is moving us forward into new and uncharted territories.

After Rohan’s enlightening talk, Kelli Swazey, an antrhopologist took the stage to discuss her foray into an extremely different culture. She told the audience about her mother’s shock when she revealed that she had fallen in love with a man from South Sulawesi, and was planning on getting married. Imagine her mother’s reaction when Kelli informed her that her soon-to-be husband was part of the Toraja community, which practice extreme and sometimes jaw-dropping death rituals. Some of these rituals include funerals that can last for weeks, and keeping the remains of deceased relatives in the home and interacting with them as if they were still alive. Kelli expressed to the audience how important it is for people to not only be open to difference, but to embrace it their lives. Kelly now views the end of her own life differently: not just as a biological and medical event, but a social and cultural one as well. Her ability to open herself up to extreme difference and embrace it wholeheartedly truly inspired the audience in Oman hall.

Anand Gandhi, an intrepid videographer, explained why he does what he does. He first talked about how parts that are guided by causality and purpose can, on the whole, exhibit freedom. Then, he went to ask the fundamental question of how the whole can be greater than the sum of its parts. His example was the human body- a monolithic entity as opposed to the billion cells that make it up. He then ventured into how choice is created by the existence of a decision-making system. This idea of parts vs. the whole is explored in his critically acclaimed film, The Ship of Theseus. The central question of the film is taken from Plutarch -If a ship is replaced part by part over a century, in the end, is it still the same ship? Rohan went on to describe how he overcame various distribution problems by promoting the film on facebook, and asking users to request the movie be screened in their cities. In addition to the cities the movie was originally released in, Rohan’s facebook experiement allowed the film to open in 36 other cities around the country.

At the end of this session, INKLive 2013 was introduced to showcase the activities INK organizes for a younger audience. The enthusiastic INKlive audience received a warm welcome from the INK2013 audience via live video conference call made possible by Elucido.