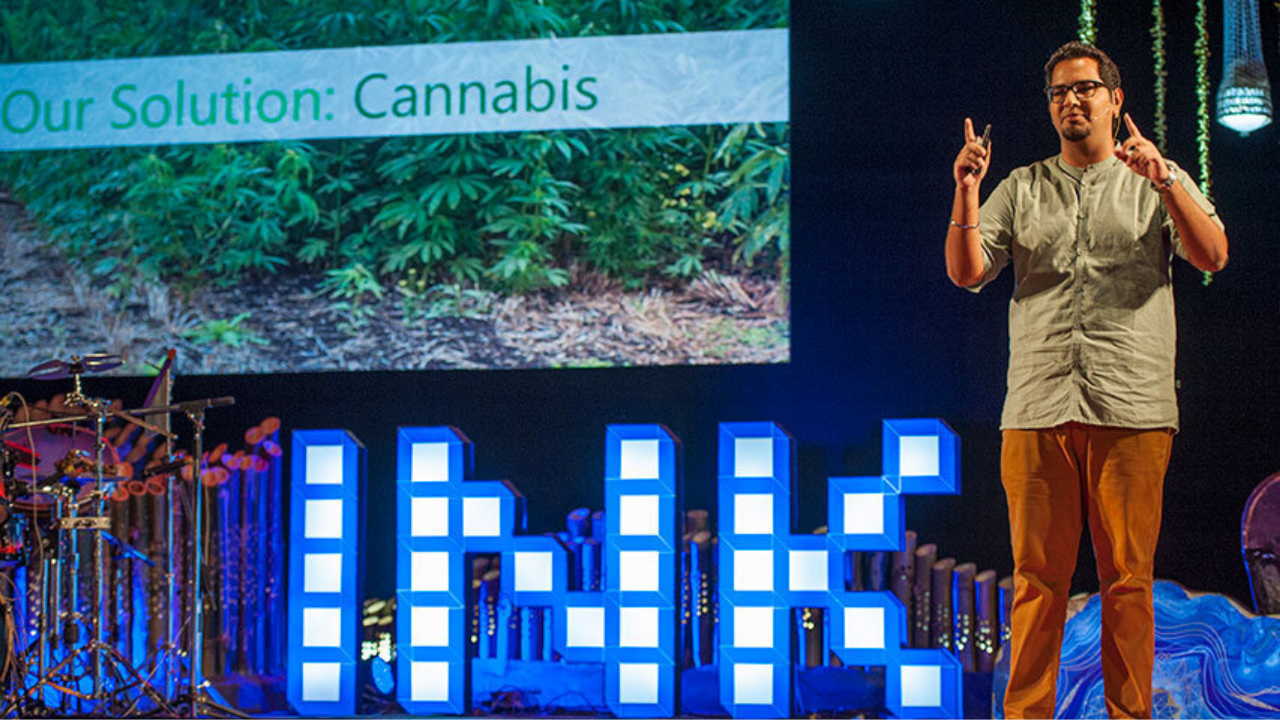 This session was about how society has changed to value those who have money and power as opposed those that have the passion to serve others.

The session starts off with Sanvar Oberoi, an agricultural entrepreneur with an unusual profession. He owns the Bombay Hemp Company, which produces cannabis Sativa (not it’s illegal cousin, cannabis Indica). Hemp has a multitude of uses and is a trillion dollar supercrop. However, it has been marginalized due to its’ connection to Indica. Due to the revolutionary uses of hemp, Sanvar feels that the hemps industry can revolutionize agriculture, housing, clothing, and food production. The impact of a revolutionized hemp industry would be felt primarily by farmers. This would be significant because Indian farmers make up 10% of the global community of farmers.

After Sri. Tatwamasi Dixit was Shwetal Patel, one of the innovators behind India’s first Biennale. Shwetal, with a background in the UK art and fashion world, brought this concept to Kochi after two and a half years of planning and preparation. The vision behind the Kochi Muziris Biennale, which took place in 2012, was to create a space in which local residents and international visitors alike could appreciate art for art’s sake. The non-profit event incorporated art from 89 different artists from 23 countries, and was seen by 400,000 visitors from all walks of life. Shwetal has big plans for the next Biennale, which will open in December 2014. He spoke passionately about increasing the international prestige of the event over the course of the next several Biennales.

Following that, Tina Sharma got the audience up and moving with some post-lunch Bollywood Aerobics to get the crowd invigorated for more presentations.

Ronak Samantray, the inventor, gave his talk on his company, Nowfloats. He noticed something was missing- despite the amazing array of existing products, there wasn’t a way for entrepreneurs to get their goods noticed by consumers. With the advent of online retail in india, consumer behaviour had shifted to people searching for products online but purchasing them offline. Ronak’s company created an organic search that provides a voice to small and medium businesses that would like the world to find their products or promotions quickly and easily.

Where others saw the possible end of the print media industry, Girish Ramdas, the CEO and co-founder of Magzter, saw an opportunity for change. Girish started Magzter in 2009, and in a year, the app had some 12,000 downloads. With the introduction of the iPad in 2010, Magzter was able to become the fastest growing cross-platform digital newsstand. The app has allowed Girish to change seemingly static aspects of print media. For example, Magzter features “talking covers”: videos featuring aspects of a cover shoot that the reader can enjoy anytime on their mobile devices. Girish’s new take on print media is now reaching readers in more than 200 countries, including 2 users in Antarctica!

She may have lost her sight, but Sabriye Tenberken, the co-founder of kanthari, the International Institute for Social Entrepreneurs in Kerala, never lost her vision. After receiving a diagnosis that she would someday lose her sight at the age of 9, Sabriye worried about being isolated, feeling alienated, and sitting in the dark. As she told the captivated audience, she is still isolated, she is still a bit of an alien, but the darkness never came. Sabriye traveled to Nepal, where many see blindness as a punishment for something done in a past life. She started a school, or “spring board” for blind children in Nepal, which is now run by former blund students, and brought her idea of a springboard for physically challenged innovators to Kerala. The institute, known as kanthari, is named for a small weed-like chili pepper that grows everywhere in Kerala. When her students are told that their dreams are too big, they reply that one must only bite into the tiny kanthari chili to understand that a small chili can make a big difference.

While the last performer of the day set up, Anson Ben, the executive director of programs at INK, took a moment to thank our partners.

A lively performance by Asima was the perfect way to end the first day of INK2013. The nine-member vocal and percussion ensemble from Trivandrum had the audience up and dancing with a folk medley that was truly one of a kind. After raucous pleas for an encore, Asima obliged, and the dance party continued. The audience left refreshed and ready for more on day two!