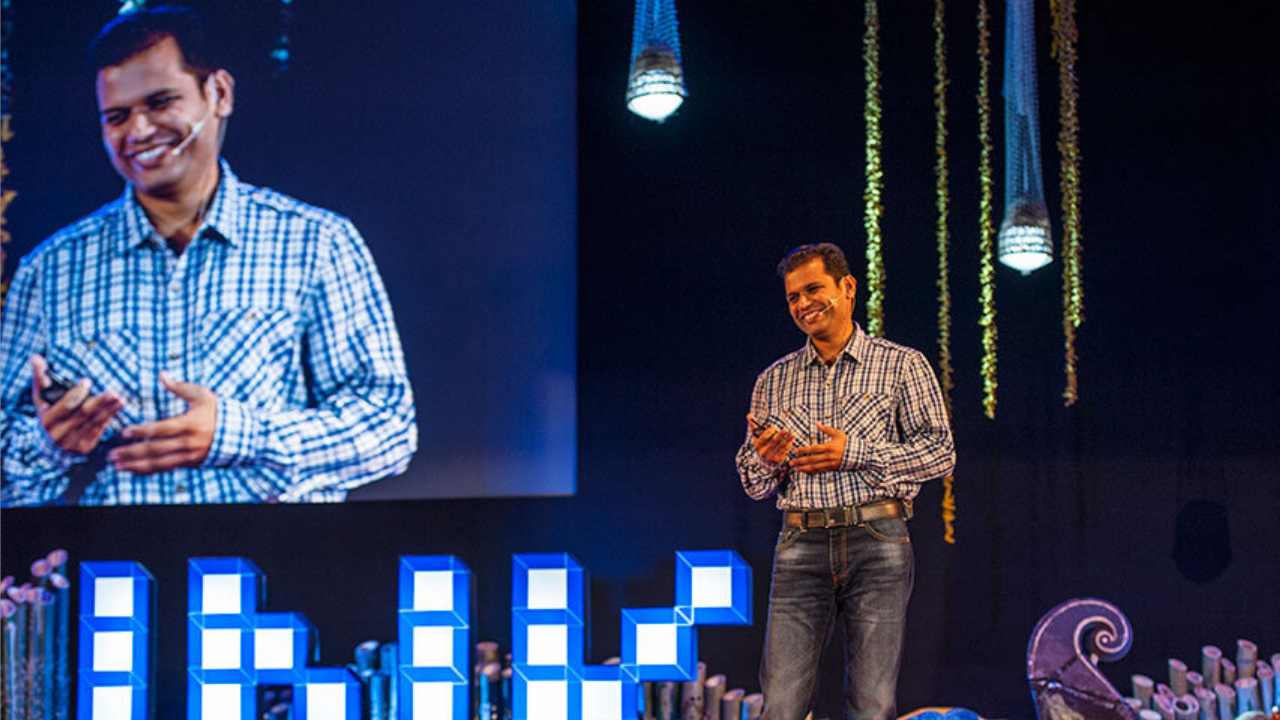 At the magnificent Jamshed Bhabha Theatre at NCPA, Mumbai, INK founder and curator Lakshmi Pratury took the stage to kick-off INK Women 2014. We couldn’t have chosen a more perfect day than the International Women’s Day, March 8th, to launch INK Women with the theme “Aspire, Achieve, and Inspire.”

First up was Sunil Khandbahale. Hailing from a Marathi medium school, his journey began when he joined an English medium engineering course. Overwhelmed by the curriculum he could not comprehend, Khandbahale made the dictionary his friend. Using it as his sole weapon, not only did he clear his exams but also compiled his very own lexicon. He also grazed all programming languages in a span of six months to make his first program, a digital dictionary. Khandbahale soon spread this multi-lingual dictionary over various platforms such as mobiles, PCs, and SMS. Today his dictionaries have over 112 million users in 150 countries. At the end of his talk, Khandbahale invited his mother on stage, acknowledging the fact that without her support he couldn’t have been where he is standing today. His mother stood proud next to him. [Watch Sunil Khandbahale’s INKtalk here]

Anusha Ravi, CEO, Park Group Institutions, took over the stage next with exuberating confidence. In her own words, she seemed to have been diagnosed with a rare gene known as the ‘Strong Woman Gene.’ She sure did have one! She was the first person to put internet access on a plane. People believe that education is the solution to everything, but the facts speak the opposite. Mahesh at her schools focuses on sensitizing her students. They celebrate Children’s Day at orphanages, and for every annual day  the students are given a ‘Big Project’ in service of community. Ravi stands tall for her belief that “,The highest form of education is one which gives humanity.”

Arunachalam Muruganantham never fails to start off on a jolly note. Here too, he told Sunil Khandbahale that he would definitely go through his dictionary to improve his vocabulary!! He shared with the audience how he transformed crisis into an opportunity. Working as a workshop helper in a small village, Murganantham realized the issue of sanitary napkin use and access when he found out that his own wife was using unhygienic alternatives. To cut down the production cost of sanitary pads and to break the market monopoly of multinational giants, he built his own machine. This journey wasn’t simple. Muranantham stuck to his ‘T & E Method,’ a term coined by him for Trial and Error method. Today Murganantham is an inspiration to all,  the women he has empowered are driving the change — “by the women, for the women, and of the women” -a Silent White Revolution. [Watch Arunachalam Muruganantham INKtalk here]

Next up was Dr. Uma Ramakrishnan, a DNA Scientist from the National Centre for Biological Sciences. Dr. Ramakrishnan believes that the past predisposes you to certain diseases, and your past along with your DNA can hint where you are heading to. Dr. Uma’s research is focused on a tigers. She ingeniously uses tiger faeces to extract DNA and thus trace their origins and migratory origins. She feels that the need of the hour is to increase tiger population which can be implemented by building tiger highways between protected areas. The fate of this beautiful animal in the Indian subcontinent relies on these highways. [Watch Dr. Uma Ramakrishnan INKtalk here]

Shankar Tucker and Vidya Iyer mesmerized the audience with some melodious Indian classical tunes. [Watch Shankar Tucker’s INKtalk here]   Anti-trafficking crusader Sunitha Krishnan wrapped up the first session on a strong note. She grew up in a community where she was adored for her free spirit and courage, inequality and stigma were strangers to her. Krishnan’s struggle began when, at the age of 15, she was gang-raped by eight men. She cried out to the audience “,Rape doesn’t kill a girl, victimization does!!” Krishnan started Prajwala, an organization which rescues young girls and women from the shackles of prostitution. These women who get raped forty to fifty times a day learn to trust themselves more than us. Prajwala strives towards normalizing their lives and helping them realize their worth.[Watch Sunitha Krishnan’s INKtalk here]

INK Fellow and activist Robin Chaurasiya sparked off the second session with a bang!! She declared loud and clear — “age is no barrier to make a difference.” With her organization Kranti, Chaurasiya has been giving a new life to young girls from Kamathipura, a red-light area. These fearless girls from Kranti then presented a short play knitting together multiple real life stories. These were stories of these very girls. Some were kicked out of home while their mothers attended customers at the brothel, while others saw their sisters being sold. Yet their aspirations never died. Shweta Katti became the first Indian girl from a red-light area to move to US to pursue a degree in psychology, she believes that the girls abused in red-light areas need a therapist most. They are taught to love themselves and to live life.[Watch Robin Chaurasiya’s INKtalk here]

Next up we had Archie Comics’ “accidental boss” Nancy Silberkleit. Her transformation from an art educator to the Co-CEO was one from Betty to Veronica. Her mantra for spreading knowledge is “Comic books + Children = Reading.” Silberkleit shared with us how they get conversation started on issues such as bullying, obesity, and healthy eating through their comics. She believes and shared “, When Archie Andrews speaks, the world hears.” [Watch Nancy Silberkleit’s INKtalk here]

Screenwriter and director Megha Ramaswamy was up next. Currently working on a film called Newborns, based on the theme of Acid Violence. She enlightened the audience with statistics which stated that 90% of such cases are against women. Ramaswamy’s film highlights the aftermath of an acid attack especially the painful rehabilitation process. It features acid attack victims from Delhi, Nasreen and Lakshmi. Nasreen got on stage with Ramaswamy  and showed great courage by removing her scarf, unveiling herself for the first time since the incident. She said that she never got support, but will always strongly stands up for all those who need her.

Next up, Godrej India Culture Lab’s Parmesh Shahani started off by saying that articulation of self is of utmost importance and next comes articulation of the world. While he studied at MIT, gay marriage was being legalized in some US states, and uncertainty about the LGBT future in India was growing. In 2009, when the High Court decriminalized Section 377, he viewed it as a renaissance. Supreme Court’s recent judgement to overturn the High Court ruling is a huge set-back — “the genie cannot be put back in,” Shahani believes. He continues to strive for the cause by promoting the Indian culture and tradition of acceptance. Shahani specifically reached out to women present as he believes they have the power to change perception, not courts run by primarily old men.

Following Shahani was Sabriye Tenberken, a visionary whose indomitable spirit has transformed lives of many. From a young age she was fascinated by how her mother dressed up like a man to travel the world freely. Even though Tenberken lost her sight at the age of 12, she never lost her love for travel. This is how she came to start a school for the blind in Tibet. She empowered those young dreamers to speak out “, Hey!! I’m blind!! So what?” In 2005, she co-founded Kanthari in Kerala, named after a small spicy chili native to Kerala. Kanthari enables dreamers to never stop believing in the good that exists in the world. Tenberken’s students invite you to bite into a Kanthari to see how a small chili can make a big difference! [Watch Sabriye Tenberken’s INKtalk here]

Next up was serial entrepreneur Vani Kola, who spoke to us about striking the perfect balance between family and work. Coming from a conservative family, becoming a serial entrepreneur wasn’t an easy task. She told us of how her decision of becoming an engineer was a topic of hot debate in her family. From starting off unconventionally, to landing up at Silicon Valley, and then deciding to move back to India — she has fought and won against all odds. Vani Kola signed up saying, “Make a leap without knowing where you’ll land…”

Illustrator and INK Fellow Alicia Souza had been live-sketching for INK Women all this while got on stage to showcase her. It really was a delight to see her ink her ideas beautifully on that one sheet of paper.

The finale couldn’t have been more spectacular. the legendary Usha Uthup with her heartfelt talk that made us believe in our conviction for our dreams and their realization through honesty. Starting her career in 1969 at a night club in Madras, her journey was one of transforming limitations into strengths. Uthup passed on this message to the audience by exemplifying how she used her unique voice as her weapon, and stands where she is today. She then got the audiences up and dancing with liberating tracks such as Shaan Se and Bindiyaan chamkegi. [Watch Usha Uthup’d INKtalk here]

To the end the evening with a bang, the incredible dancers from The Shiamak Davar Dance Company  took the stage to perform parts from their new piece ‘Selcouth,’ and some spectacularly choreographed high-energy Bollywood numbers.