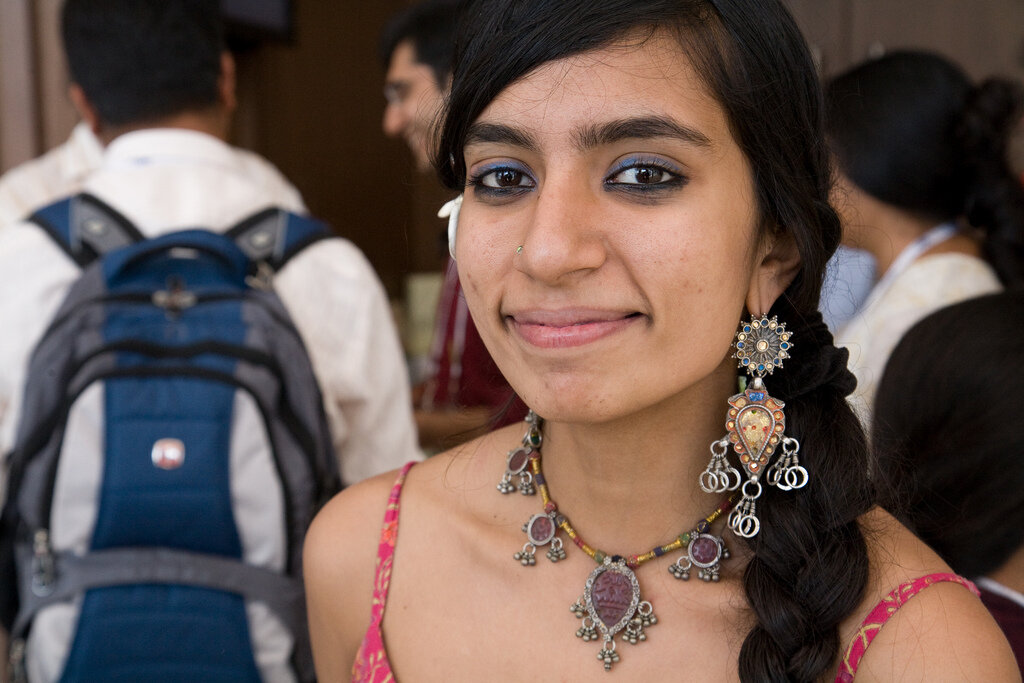 She can easily be mistaken for the paintings she paints. The vibrant colors of her sometimes quirky robes and skirts, the soft voice and delicate features; the dark depths of ocean visible in those kohl-rimmed eyes and not to forget the fragrant frangipani adoring the pride of place in her long tresses. We think Shilo Shiv Suleman does not need to look far to find her muse. It lives with her.

As with everything in her life, her meeting with INK and then subsequently being nominated as a Fellow of the inaugural INK Fellows program was a matter of chance and ‘divine intervention’! At the conference in December last year, Shilo wowed many, including illustrator and cartoonist Lynda Barry and ‘The Simpsons’ creator Matt Groening. As she says, “Let the beauty of what you love be what you do,” and post INK 2010, she set about creating her travelling journal that reflected the inspiration from the people and ideas she encountered at INK.
When INK was helping spread the word about TED-Levis’ Shape What’s to Come contest in India, Shilo decided to apply. But before we let her describe how the events unfolded and she was finally picked as one of the four women to represent India at TED Global that begins this July 11, we should tell you what the contest was about. Through this contest, TED and Levis were looking for “young Indian women who are positively impacting their communities and building their personal legacies, embracing their rich cultural heritage even as they shape it into something entirely new.”

Says Shilo, “So a while ago I heard about Levi’s Shape what’s to Come Community. I told myself I’d apply. But went out of town, got distracted by a hundred other shiny objects and missed the application date.” Fortunately for her the last date was extended, and while she was walking around the streets in Mumbai, she got a call from a friend saying she had exactly 15 minutes to apply.

“The first assignment of sorts was to create a visual diary of one’s journey into our respective fields. This made me feel like it was even more fated. I’ve been keeping visual diaries all my life!!” adds Shilo.

“Two days later I found out I was one of the 17 women chosen from across India to create the community and I was among some fantastic women, some singers, some fashion designers, photographers, activists and more!” And out of those 17, her name featured with four others who have been invited to attend TED Global.
Even as INK wishes her all the best in her future endeavor, we also hope that this is but the beginning of yet another miraculous journey.