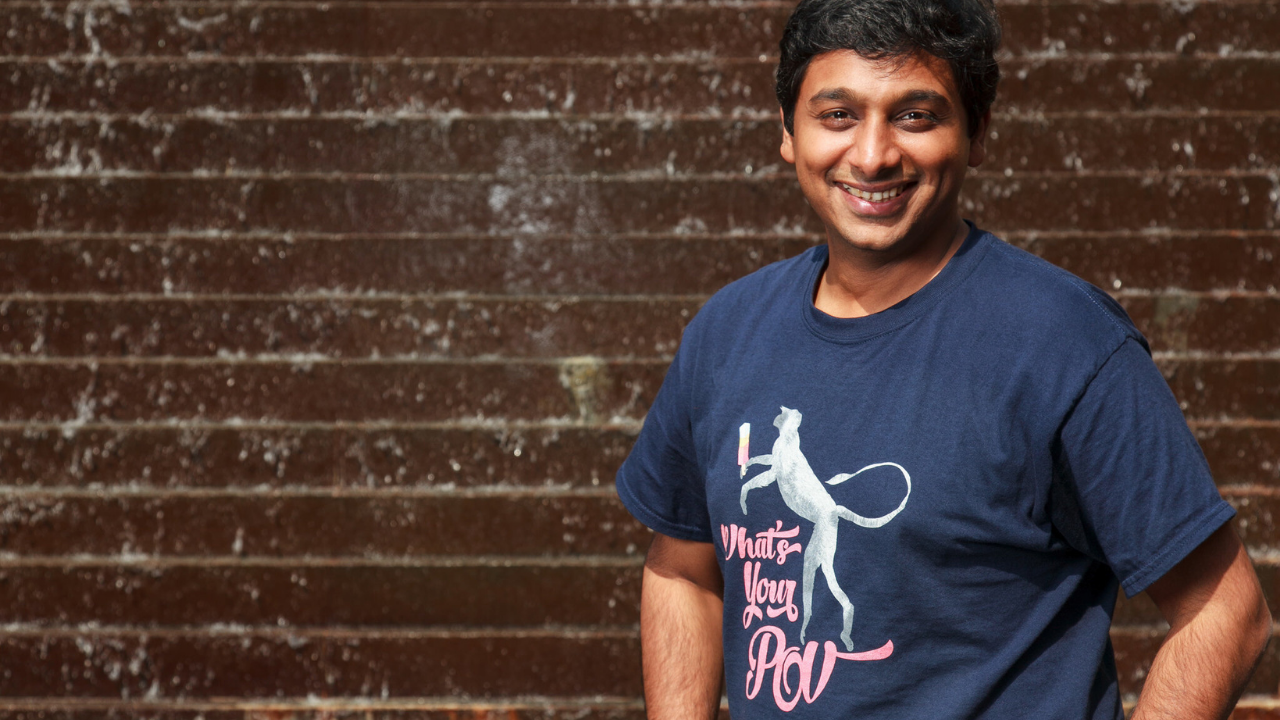 16 year old guest blogger Nishant Kondepudi, tells us about his experience of meeting a world famous artist for the first time at the INK office.

CNN named him one of the most remarkable people in the world. To describe Raghava KK is a difficult task. To classify him is an impossible one.

Believe me, I tried.

Raghava is a person constantly on the move, always working on a multitude of projects simultaneously. And not once will he describe one of these projects as inferior to the other. He is exceedingly passionate about his work, and has always been. When answering questions, he navigates the confusing waters of philosophy and broad topics with ease and clarity, the words flowing freely and without a second thought. Yet he stumbles when asked about his favorite movie. All of these qualities and mysteries combine to form one of the most interesting people I have ever met.

As he opens the door, the first thing I notice is a big smile on his face. Welcoming and friendly from the get go, Raghava provides a uniquely relaxed vibe which masks how crazy his life really is. While talking, he tells me that he did not own a television until he was in his thirties. Why? Not enough time. He is the type of person who is always working on five things at once. As we sit down for coffee, he tells me some more about the projects that keep him busy.

When most people (along with Google) describe him, they say he is an artist, but Raghava says, “I’m not just an artist. I bring art into the world of science and technology.” This is his mission, and he explores it through a number of roles. A contributor to National Geographic, and a solo artist to name a few. Along with all this, he has written in a prominent psychology textbook, has given a lecture at a famous school of art, L’ecole de Bozar and is currently producing a music album with more than forty Grammy winners. His accomplishments and endeavors all contribute to who he is, and it is his passion for art which shines through.

What is art? I’m always interested in this question, because every person’s definition is a little bit different. So when I proposed it to an actual artist, I was especially intrigued at what his answer would be. “I see art as a way of knowing,” Raghava states. “Not as a product.” He explains that to him, it was never about creating a piece. It was a method of inquiry. “I want to know what living like the pope feels like, and what being Donald Trump feels like.” Art isn’t a mechanical process to him. It lives and breathes. He doesn’t just paint. He does digital art, performance arts, and much more.

Of course, with Raghava, it isn’t just what. It’s who. Being a husband and a father of four, work is not all that occupies his life. His kids don’t partake in didactic education. “Because my job as a parent is to educate my children about the world, to reveal their creative spaces, not fill them.” He says that what he does for a living will never make an impact on how he lives. “I want to be authentic and honest to myself. Life is a balance, and my relationship with my wife means as much as my career, it’s an artistic collaboration. Happiness is about the depth of your relationships, not how many you have.” He says that this message is what he wants to impart to people learning from him. When he gives talks to INK fellows, this is what he tells them.

INK has always been a huge part of his life, as he has been at its helm since inception. Raghava fondly recounts trying to come up with a name for this endeavor with Lakshmi Pratury, co-founder and curator of INK. He remembers meeting Lakshmi for the first time in his twenties, at actor Kamal Haasan’s house. By this point, Raghava had already made his name as an accomplished artist, and had no idea who Lakshmi was. Yet once they started talking over dinner, a connection formed quickly. Following that, they became close friends. Raghava says he was a guinea pig of sorts in the early days, speaking at events and providing his input. And after TEDIndia took place, he became a part of much more. Today, Raghava is still fully part of INK. His official titles include Chair of the Fellows Program, as well as an inner circle member. “From organizing chairs at an event to curating speakers to being a speaker, I’m part of INK at every level.” The fact that Raghava is a part of every position at INK sometimes confuses some people, which in turn amuses him. “I can see people wondering ‘what does this guy do here and how does he get away with all this stuff’. It’s because INK is my family” He speaks about INK with such a passion that I can only assume one thing. Raghava is an essential part of INK, and INK is an essential part of Raghava.

Our conversation hits its deepest and final turn as Raghava tells me about his past. He describes quitting his academic career in eleventh grade. He knew that this was not the direction he would go in life. Art was something of a hobby at this time. A hobby which he developed until he hit massive success. “There was a time when anyone would buy my paintings. A-list actors, athletes, and politicians. I would spend all my time around these people, travelling the world to sell my art,” So I wonder why give that up? Why stop that life? His answer: “I felt empty. I thought ‘who am I doing this for? I want to do something for me. Can my works being collected by everyone, can that define me? Can success define me? I’m defined by my questions. By what I wake up for in the morning.” So he retreated a little bit from that life in search of a new mission. One that he could truly get behind.

Raghava says his toughest challenge has always been “keeping the spark alive”. So he sought out to do this by bringing art to all worlds. “I’ve not restricted my life to the galleries,” he says, “I bring it to neuroscientists, students, people all around.” So that is what he does today. He works on all types of projects in order to bring art into every field. Doing this, he is truly one of the most remarkable people in the world, and a personification of the type of talent and ingenuity that the INK office holds beneath its vast caverns.