Activist Sunitha Krishna shakes the audience with a powerful talk on her fight against the rapists of the world, her campaign to get the crimes reported and offenders arrested, and a passionate call to action. 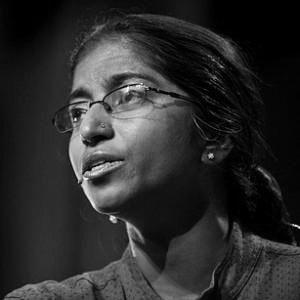 Sunitha Krishnan, Founder and Director of Prajwala, or “an eternal flame”, is an eminent anti-trafficking activist internationally known for her fight against girl child trafficking for the purposes of commercial sexual exploitation. A mental health professional, she has done extensive research and is essentially a field practitioner. Prajwala runs 17 schools throughout Andhra Pradesh, India, for 6,000 children and has rescued more than 4,200 women from prostitution, 2,100 of whom Krishnan personally liberated. Sunitha has sparked India’s anti-trafficking movement by coordinating government, corporations and NGOs. She forged NGO-corporate partnerships with various companies to find jobs for rehabilitated women. Krishnan works closely with the Indian government to define anti-trafficking policy, and her recommendations for rehabilitating sex victims have been passed into state legislations