Looking deep into the ocean

In this awe-inspiring talk, oceanographer David Gallo shares with us the wonders of deep sea exploration — our quest to understand the blanket of water that covers 70% percent of the Earth’s surface, which is full of stunning life and yet undiscovered marvels at its depths. 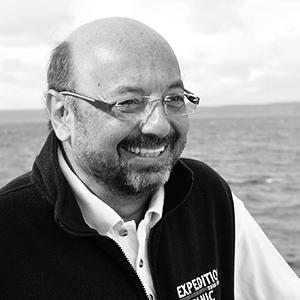 David Gallo is an American oceanographer and Director of Special Projects at the Woods Hole Oceanographic Institution - a preeminent, globally recognized scientific laboratory. For more than 25 years, David has been at the forefront of oceanic exploration, participating in and witnessing the development of new technologies and scientific discoveries that shape our view of planet earth. He has been described by TED as “an enthusiastic ambassador between the sea and those of us on dry land.” With more than 8 million views on his TED talk, “Underwater Astonishments” is among the top 3 most-viewed TED Talks to date. Gallo earned his Bachelor of Science and Master of Science degrees in geology from the State University of New York in Albany and a Doctorate degree in oceanography from the University of Rhode Island. In 1987 he joined Robert Ballard’s team at Woods Hole Oceanographic Institution as Assistant Director of the Center for Marine Exploration. David has participated in expeditions to all of the world’s oceans and was one of the first scientists to use a combination of robots and submarines to explore the deep seafloor. He recently co-led an expedition to create the first detailed and comprehensive map of the RMS Titanic and he also co-led a successful international effort to locate the remains of Air France flight 447. Davis is presently involved in planning an international expedition to locate and document the wreckage of Ernest Shackleton’s ship, HMS Endurance. David is outspoken about the relationship between humanity and the sea. He strongly believes that instead of taking the oceans for granted, we need to recognize the oceans' critical role in providing the air we breathe, the water we drink, and the food we eat. Dr. Gallo believes human activity has impacted the ocean on a global scale with significant consequences. David claims that oceans hold the clues to our past and the key to our future, yet they remain mostly unexplored and misunderstood. Dr. Gallo is personally committed to conveying the excitement and importance of ocean exploration to the public. He has lectured internationally to audiences ranging from children to CEO’s. He has given more than 10 TED and TEDx presentations and has appeared in numerous documentaries (Discovery Channel, History Channel, National Geographic) and has been featured on numerous televised news programs (Weather Channel , PBS Need to Know, MSNBC Ed Show, and NBC Today show). In recognition of his role in exploration and communications, David is the co-recipient of a Computerworld-Smithsonian Award. He is an elected Fellow of the American Association for the Advancement of Science, a National Fellow of The Explorers Club, and a recent recipient of the Lotus Club Distinguished Achievement Award in Science. He is a member of the XPrize Deep Ocean Advisory Board and James Cameron’s Deep Ocean Task Force. “All that matters is being true to myself.”