From animating Call of Duty to realizing my duty

Sunil Thankamushy was living his dream — animating dinosaurs, working with his hero Steven Spielberg on creating the insanely popular Medal of Honor™ video games; and later helping launch the Call of Duty™ franchise. Disillusioned that these virtual worlds were becoming darker and too real, Thankamushy chose to champion the use of gaming technology to create more meaningful entertainment that nurtures curiosity and wonder. 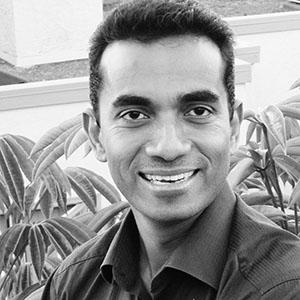 Sunil Thankamushy is a US-based, sixteen-year veteran of the video game industry who was part of the core teams that developed highly acclaimed, successful video game franchises, such as as Call of Duty™, Finest Hour™, and Medal of Honor™. In his teens, his keen interests in science, politics, and nature took shape as several political and science-themed cartoon columns in prominent Indian newspapers and magazines like Indian Express, The Week, and Human Behaviour Digest. Sunil came to the US from India on a full scholarship from the Rotary Foundation and the INLAKS Foundation to study animation at University of California, Los Angeles (UCLA) in 1993. After a rigorous three year program during which he was also cultural ambassador from India for the Rotary Foundation, Sunil was hired by DreamWorks Interactive studio as one of its first animators. He was one of the handful of people selected to animate the video game Medal of Honor™. As the first animator and eventual Animation Director of this game, working closely with his peers, Sunil helped execute the vision of legendary director Steven Spielberg to launch a hugely successful video game franchise. After seven years of working at DreamWorks Interactive, and later Electronic Arts, Sunil joined hands with other game veterans to co-found Spark Unlimited™, a game studio based in Los Angeles to create next-generation video games. Ten years after its inception, Spark has a long body of work that includes helping launch the now multi-billion dollar Call of Duty™ franchise, Turning Point™: Fall of Liberty™, Legendary™, Lost Planet 3™, and more. Blending technology and animation has been a passion for Sunil. In every stage of his career, he has successfully created animation paradigms and technology to improve the level of immersion in the virtual environment of the game, and heighten the experience of realism for the player. He has given talks about some of these at various conferences. After shipping more than 8 video game titles for teens and grownups, Sunil decided to change his life direction and make knowledge-based games to enrich children. With this as the goal, he recently launch DEEPBLUE Worlds Inc., a game studio with the vision of creating innovative online virtual worlds for children with the theme of exploration of nature. After a long and arduous development schedule, he is about to launch his premiere product, XPLORE PANGAEA™ in a yet unannounced partnership. Sunil lives with his wife Diana, and 2 children in beautiful San Diego, California. “All that matters is making meaningful entertainment for kids.”