Teenager Adrianna loves expressing tumultuous emotion musically. At INK, she chose to play ‘Sposalizio’, by Liszt, a piece based on the painting, “The Marriage of the Virgin,” by Raphael. The contrasting moods of the piece are meant to symbolize a wedding scene, with the rise and fall of euphoria and pounding exuberance. The reflective quality in the piece is intended to be thought-provoking with its slow, tranquil passages. 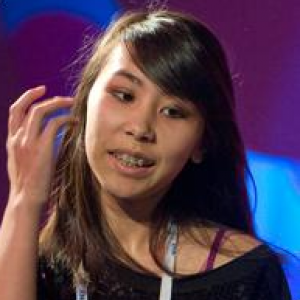 With a wide range of passions including music, poetry, and art, Adrianna Svitak studies piano and violin as well as singing. Her musical interests range from Michael Jackson to Mozart, Beethoven to Beyonce. Nine years of practice have led to awards from events, including the Seattle Young Artists� Festival, the Performing Arts Festival of the Eastside, the Music Teachers� National Association and the Bach Festival competition. In violin, her accomplishments include being named Concertmistress for the Redmond Junior High Honors Orchestra as well as the Junior All-State Orchestra. Untold Story Adrianna co-authored Dancing Fingers, a volume of poetry, with her sister Adora. Her poem �Minnie� was inspired by her pet guinea pig of the same name.