Child prodigy and author Adora Svitak says she is not really sure if anything much has changed since the 1700s’, when parents like former US President Thomas Jefferson wrote a letter of advice to his then 11-year-old daughter Patsy. Among other things, he especially asked her to behave herself and keep her clothes neat and tidy. Surely Patsy would have rolled her eyes at all the parental guidance, and if she were on facebook she would have shared it with her friends and possibly her father as well if she happened to accept him as a friend. Would Jefferson have seen reason and understood Patsy’s view, or would he have admonished her further? Hear Adora’s stories of how technology is helping parents and children relate to one another. 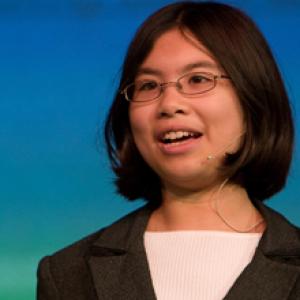 Seeing Adora walk down the street, you might not think that the seemingly typical thirteen-year-old is a published author, activist, accomplished speaker and one of the world’s youngest teachers. With many roles, Adora leads many lives. Many wonder how she got those roles in the first place. What people may not know is that Adora has had years of practice—half her life, in fact. As one of the world’s youngest teachers, she’s spoken to over 400 schools and classrooms worldwide. Called a “tiny literary giant” by Diane Sawyer, Adora is the author of two books, Flying Fingers and Dancing Fingers. Her TEDTalk, ‘What Adults Can Learn From Kids,’ was widely watched around the world. UNTOLD STORY: When Adora Svitak speaks on stage, you may not realize that the thirteen-year-old is the same girl who hunts for free food, rolls her eyes at her parents, or debates with her sister regularly. WORKS: Flying Fingers, Dancing Fingers WEBSITE: www.adorasvitak.com