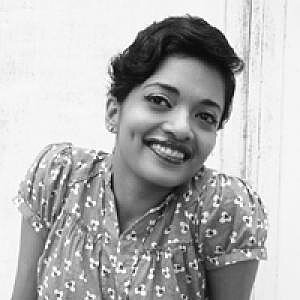 Suman Sridhar is a singer, actor and songwriter. She forms one half of the contemporary music duo, Sridhar/Thayil. Rolling Stone India magazine calls them “two of the most uninhibited people that ever came together to play with music.” Suman has performed at the Great Escape Festival (UK), Galle Literary Festival (Sri Lanka), Southbank Centre (UK), National Centre for Performing Arts (Mumbai), Prithvi Theatre festival (Mumbai) and more.

Sridhar is a singer, actor, songwriter and producer. Jeet Thayil and her form the contemporary music project, Sridhar/Thayil. S/T was named one of 9 Artists to Watch in India by Rolling Stone Magazine and awarded the Jack Daniel’s Rock Award for emerging act of the year in 2009. Sridhar has been described as “one of those rare singers who combine an old-world voice with a very contemporary sensibility.”

I was fourteen years old when my family moved from India to the States. Exiting JFK airport, it felt like I was entering the future- the wind hit my face with interstellar speed, I could only discern the whizzing cars by the trail of light they left behind. I was teleported from an all-girls Catholic school in a Bombay suburb to east coast carpeted high school hallways where sex-drugs-guns was the word of the day. The graffiti on the walls began to blur the pan spit in my memory, and ‘galat’ was replaced by ‘grime.’ My neighbour handed me my first jazz record- Verve’s ‘Ultimate jazz’ collection. It was okay to be dark, it meant you could sing and run- the two activities that belonged to the third world, to the past.