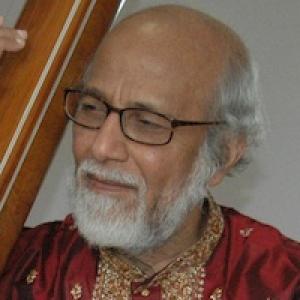 Pandit Shyamrao Kulkarni is a doyen of North Indian Classical Music. He is a vocalist of the highest caliber, whose voice provides an effortless rendition of his musical thoughts as he creates beautiful expositions of various raagas.

The typical description of an Indian classical musician starts with a description of his gharana or his musical lineage. But such a description would serve little purpose in describing his music.  He does indeed have an exalted musical lineage as he was taught by Bhimrao Kulkarni and Ingle Bua of the Gwalior Gharana from a very early age. During his formative years he also had the opportunity to closely interact with many Indian Music stalwarts of the time from many other gharanas. As he analyzed and dissected their music he acquired and improved upon many elements of style from the strict and somber khayal singing of Vilayat Hussain Khan of Agra Gharana to the light qawwali singing of Shankar Shambhu. Of particular formative influence during his younger years was the musical style of Ustad Alladiya Khan as delivered by the likes of Kesarbai Kerkar and Anandrao Limaye. His music, however, eventually evolved beyond what can be described by a listing of musical lineage.

In his music sur (notes) and taal (rhythm) find a perfect balance. The unfolding of a raag is always thought out in a manner such that the various musical phrases fit together into a consistent whole. Nothing is performed merely for the sake of a display of virtuosity. Instead notes flow with accuracy and grace in service of a greater aesthetic of creating an artful whole.

Pandit Kulkarni never actively pursued a career in the concert circuits, preferring instead to focus on his music. He has, however, been highly respected and regarded by musicians and connoisseurs in Maharashtra, India, for the last six decades. He has written many widely acclaimed books in Marathi, Hindi and more recently in English on various aspects of Indian music. Now in his seventh decade, he has been thinking about the most efficient and streamlined way to teach North Indian Classical Music. To this end, he has created a unique functional classification of raagas based on similarity of their characteristic melodic patterns and he is continuing to write and publish new books. He also continues to occasionally provide lecture demonstrations and performances to share his music with lovers of Indian Music.