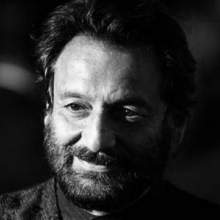 A filmmaker and storyteller, Shekhar Kapur is a Padma Shri awardee, credited with directing some of the most iconic and award-winning films, that have made waves in the international cinema. His real love is exploring the relationship between man and the universe. According to Kapur, fundamental mythologies (and therefore all stories) are our attempt to come to terms with the infinite within our finite imaginations. He believes this to be the basis of all art. In Hollywood, he won many accolades for his Cate Blanchett starrer movie series, Elizabeth, on Queen Elizabeth I. Since all perception is virtual, Shekhar is now looking to find new forms of storytelling with technologies such as VR and AI. Along with music-composer AR Rahman, Kapur co-founded an early digital start-up, Qyuki; and was at the forefront of advocating grass-roots digital access as a means of economic development in India, serving on the Innovation Council for the Indian Prime Minister. Kapur divides his time between Mumbai, London and at MIT in Boston.