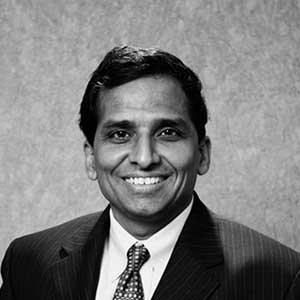 Raju is the Founder and CEO of Sierra Atlantic, a company that grew to be a best-in-class global services company over a period of 17 years. Under his leadership, Sierra Atlantic grew from a startup to over 2400 employees with operations in several countries and was consistently ranked amongst the best managed companies including the top 75 most admired companies in Silicon Valley, Top 25 great places to work in India and Top 10 best employers in South China.

Raju is active in not-for-profit initiatives and is currently Chairman of BITSAA Intl, the alumni body of BITS Pilani, India’s #1 private university. He enjoys working with young entrepreneurs in a mentorship role and was instrumental in starting the TiE Chapter in Hyderabad. Raju also serves on the Board of India community center in Milpitas, CA. He previously served as a member of the Board of Trustees for Puente, a Wharton School non-profit program which helped under privileged communities worldwide gain access to technology. He also co-founded SIPA (Silicon Valley Indian Professional Association) in 1987.