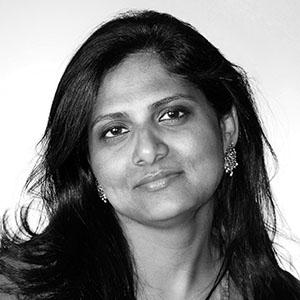 Priyamvada Natarajan is a professor in the Departments of Astronomy and Physics at Yale University. She is a theoretical astrophysicist interested in cosmology, gravitational lensing and black hole physics. Her research is focused on making dark matter maps of clusters of galaxies, the largest known repositories of dark matter. She is also exploring a new channel for the formation of the first black holes and its observational consequences at high and low redshift.

In addition to her academic position at Yale, she also currently holds the Sophie and Tycho Brahe Professorship of the Dark Cosmology Center, Niels Bohr Institute, at the University of Copenhagen, Denmark. She has been recently elected to an Honorary Professorship for life at the University of Delhi, India. She has won many awards such as the India Abroad Foundation’s “Face of the Future ” Award, academic achievement from the Global Organization for the People of Indian Origin (GOPIO), India Empire NRI award for Achievement in the Sciences. Priya was also elected a fellow of the American Physical Society and the Explorers Club in 2010. Priya currently serves as the Director of Undergraduate Studies for the Astronomy Department and is actively engaged in developing strategies to enhance numerical and scientific literacy for the public at large and writes for the New York Review of Books. Her first book aimed at the public, “Mapping the Heavens: The Radical Scientific Ideas that Reveal the Cosmos”,  will be published in April 2016.