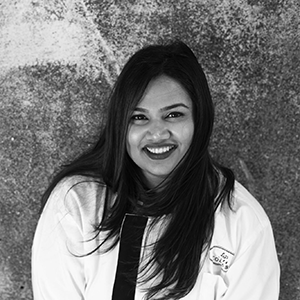 Pooja Dhingra is the founder of Le15 Patisserie and Studio Fifteen Culinary Centre in Mumbai. Pooja has also opened her first cafe at Colaba in 2016 called Le15 Cafe in collaboration with a culinary school friend called Pablito Naranjo. Armed with a degree in hospitality from Cesaz Ritz College, Switzerland and a Patisserie Diploma from Le Cordon Bleu. Pooja returned home with the single goal of creating Parisian styled culinary experiences in India.

She has been featured in national dailies and is a regular in fashion and lifestyle glossies not just for her abilities in the kitchen but also as a dynamic businesswoman and inspiration to women – she was selected by Forbes India for their ’30 Undeer 30′ achievers list for 2014 and the Forbes 30 under 30 Asia list.