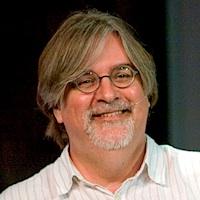 Matt Groening created the longest-running comedy in television history, The Simpsons. It exploded into a cultural phenomenon in 1990 and has remained one of the most groundbreaking and innovative entertainment franchises, recognizable throughout the world. He followed it with his creation of the hit sci-fi series FUTURAMA, currently one of the top rated shows on Comedy Central. As a cartoonist, Groening began his Life in Hell weekly comic strip series in the 1980’s which continues to this day in newspapers nationwide.