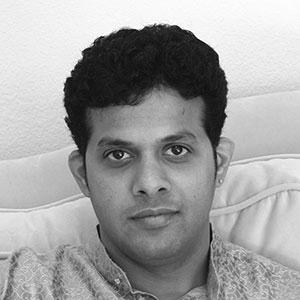 Mahesh  Kale, based in San Francisco Bay area, is an accomplished vocalist of the new generation in the North Indian Classical style. Honed in the Gurukul system of learning from the legendary Padmashree Pandit Jitendra Abhisheki, he has an illustrious pedigree, and his thrilling performances bear this out.

Mahesh  has established his presence firmly, as a popular artist and has performed extensively in India, USA, Europe, UAE, Southeast Asia. Mahesh continues to play the central character in a popular Sangeet Natak (musical), Katyar Kaljat Ghusli, for which, he has been honored with an award by the Akhil Bharatiya Marathi Natya Parishad (2010). Mahesh has also performanced at the prestigious Sawai Gandharva Music Festival which received a generous appreciation.

Mahesh  maintains  an  open  outlook  towards  music  to reach out to the new  generation,  while retaining the  traditions.  He has performed with world percussionists including Trilok Gurtu and Sivamani, and instrumentalists like Pedro Eustache, George Brooks and Frank Martin, in fusion and collaborative works, ably demonstrating his versatility as a composer and singer. In an effort to spread awareness and education about Indian classical music in the western world, Mahesh has given lecture­demonstrations and talks at various academic institutions including Stanford,

Harvard  and  the Commonwealth  Club.  He was  also profiled as Artist of the Month by Harvard Sangeet in March 2008.

Founder of ICMA Foundation, a nonprofit organization geared towards helping young professional musicians  and  retired  veterans,  Mahesh  is  also  a  teacher and an inspiration for a motivated student body of over a hundred fifty students in the San Francisco Bay Area.

He also has a Masters degree in Multimedia Engineering from University of California, Santa Barbara and in Engineering Management from Santa Clara University, but has chosen to follow his passion for music full time.