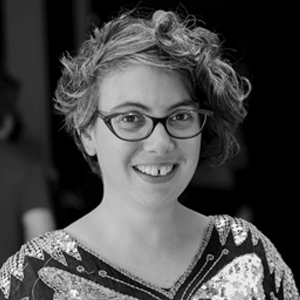 Laura is an Architectural Choreographer, known for her groundbreaking work in Augmented Dance; the fusion between movement and technology. Her most recent work includes Mass Crane Dance (www.masscranedance.org ) which was launched as part of her Creative Fellowship with WIRED Magazine. Mass Crane Dance is a spectacular meeting of music, light, and synchronized construction cranes dancing across the skyline at night.

Laura founded her award-winning and innovative dance company Guerilla Dance Project (www.guerilladanceproject.com) to specialise in Augmented Dance. They are resident at the Pervasive Media Studio, in Bristol, creating installations and spectacle shows. The company have been commissioned worldwide including USA, Brazil, Ireland, Croatia, Dubai and Indonesia. They are currently working with 7 UK and European Universities on a new touring shows Slow Into Motion, Kicking the Mic and Transference.  Guerilla Dance Project have won multiple awards for digital innovation