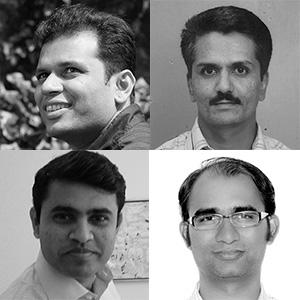 Kumbhthon is a technical hackathon, started in association with Massachusetts Institute of Technology (MIT, USA) for promoting social innovations for the upcoming Kumbhmela in Nashik.

Linguistic Enabler
Sunil’s goal is to help Indians bridge the ‘language’ and ‘digital’ divides, due to the dominance of English on the internet and in technical published texts. He has developed digital dictionaries for mobile phones and computers with a repository of 9.6 million audio and textual words in 16 domains, like Legal, Agriculture and Pharmacy, in 22 different Indian languages. Educated in Marathi-medium in a village near Nashik, Sunil believes the root of the rural inferiority complex is the linguistic divide, due to which many abandon their education. He hopes to reverse this with his free platform.

GIRISH PAGARE
Social Innovator
Girish is a metallurgical engineer working with Graphite India. With a rich experience of more than 28 years in the industry, espicallly in SQL and systems. He is the chairman of the Nasik chapter of the Computer Society of India.

SANDIP SHINDE
Social Innovator
Sandip post–graduated in Computer Science and is working as a Program Manager in Tata Consultancy Service Ltd. He has more than decade experience in several technologies and large program implementations.
SACHIN PACHORKAR
Social Innovator
Sachin is an associate professor in the Department of Management at KBT College of Engineering. He is a state-level winner of Avishkar Competition 2013 which was held in Dapoli University. Under the Project Green Street in Maharashtra he developed two innovative concepts, coconut express and Kool Kartz .