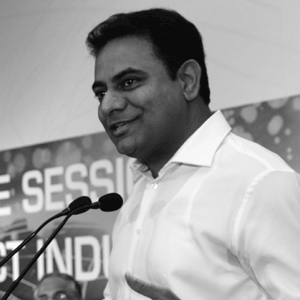 Sri Kalvakuntla Taraka Rama Rao, is the current Industries and IT Minister in the Government of Telangana. Popularly referred to as KTR, K.T. Rama Rao comes from a family of politicians, his father being the founder of the Telangana Rashtra Samithi. KTR holds dual masters degrees in biochemistry and business management from CUNY. He represented his party and directed his efforts in convincing India’s Central Government to pass the Andhra Pradesh Reorganisation Act in 2014. Under his leadership top corporations such as Apple, Google, Amazon and Uber, have set up their largest bases outside the US in Hyderabad.