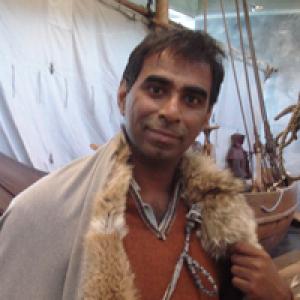 Having completed doctorates in Ecology at Old Dominion University, Norfolk, Virginia (2003), and in the History of Science at Harvard University, Cambridge, Massachusetts (2011), John Mathew is currently lecturing a freshman seminar on Science, History and Theatre at the latter. He hails from Kerala and remains an Indian national although he has spent significant periods in Iraq, Jordan, Libya, the United States of America, France and England. He obtained his Bachelors, Masters, and M.Phil. degrees in Zoology at the Madras Christian College, Tambaram, Madras (now Chennai). He also holds a Masters in Medical Anthropology from Harvard and has benefited from many scholarships in his educational journey, including the French Governmental Bourse Chateaubriand, the Harvard Sheldon and Krupp, and the Harvard Academy fellowships.

Blurring lines between the curricular and co-curricular, John co-founded the Scrub Society, the Madras Christian College�s environmental organisation in 1990 (still extant 21 years later) and served as the Secretary (1990-1992) of the Students� Sea Turtle Conservation Network in Madras that ran an active hatchery for olive Ridley (Lepidochelys olivacea) sea turtles.

John is also an avid theatre enthusiast. His association with drama began at eight in Libya playing an angel in a Christmas pageant. He proceeded to perform regularly on stage at school and college, winning the prize for best actor, and with his co-cast and crew, best performed play at one of the largest collegiate cultural competitions in India in 1992, Oasis at BITS, Pilani, Rajasthan. In 1994, his musical on sea-turtles, Olive was performed for over 3, 500 people at the prestigious Music Academy, Madras (Chennai). In 1995, his effort, Grave Affairs won best play in the category ‘English as a second language’, for a British Broadcasting Corporation (BBC) international radio-drama contest and was broadcast worldwide the following year. Grave Affairs was adapted to stage and premiered at Harvard in 2001. That same year, John co-founded SAATh (South Asian American Theatre) with Tara Deshpande (a Bollywood actress) and Sudipto Chatterjee (a drama professor then at Tufts University), the first South Asian theatre company in Boston, and served as its Artistic Director from August 2002 to August 2007. Apart from Olive and another musical, B Minor Blue, John has written five full-length plays and four short plays and co-scripted a street-play. Recently, he won the Calcutta (Kolkata) based Oxford Bookstore e-author prize for best novel (2008) in an all-India competition for his manuscript Origins and Descents.

PERSONAL JOURNEY
Travelling in a traditionally hostile neighbouring land, I countenanced my most different, challenging and memorable trip anywhere. Pakistan was extraordinary. There were lathi-charges avoided at the Wagah border, receptions at Lahore airport by machine-gun wielding security guards, deflected bribery in Karachi, feudal familial fiefdoms with an army of domestic helpers, an assumed other national identity (Sri Lankan) to see Mohenjodaro of the Indus Valley Civilisation, and through it all, there was the countenancing of such unstinting hospitality, laughter in the cracks, and in the dust of little bus-by villages, the sheer pleasure of dances in the now.

WORKS
Though They Be Red (New York: Playscripts Inc. 2003)

OTHER
Whilst at college in Madras, 16 species of snake went through my room (actively procured from the 373 acre campus). One of them (a baby cobra) bit me once through my mother�s sent kitchen gloves, and four hours later, sans anti-venom (among the most foolhardy decisions I made) and through a cytology lab experiment, I survived, relatively unscathed, to tell the tale. Unfortunately for the cobra, it didn�t, perishing of unknown causes two days later.