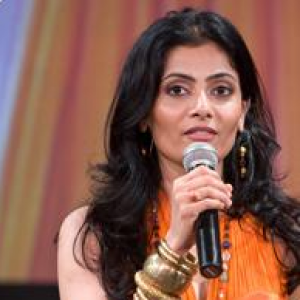 Gayatri Ganjawalla is a classically trained vocalist both in Carnatic and Hindustani styles and is currently training under the tutelage of Pt. Shri Babanrao Haldankar. She was the first Indian woman to play the leading role in the London West End musical The Far Pavilions where her acting and singing abilities received critical acclaim. Gayatri has sung for several Bollywood films and in regional languages. She travels extensively, either as a solo performer or with her husband, multiple award winner Kunal Ganjawalla.

UNTOLD STORY: In school, Gayatri wanted to be an astrophysicist. Her high point was when she won a book on how to make a telescope. She was also a national level volleyball player but didn�t grow tall enough to continue the game.