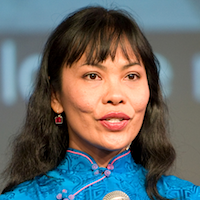 Dinh Thi Hoa grew-up in communist North Vietnam during the Vietnam War. She went to university in Moscow and later returned to Vietnam to join the Foreign Service of the Vietnamese government. In 1990, she was chosen as the first Vietnamese to receive the World Bank scholarship to study at Harvard Business School. She returned to Vietnam in 1994. Hoa has been nicknamed “a serial entrepreneur” because she is the founder/manager of number of successful businesses in Vietnam, including Galaxy, the Paris Deli cafe chain, and Thienviet Securities among several others. She also supports education and art non-profit projects.

Hoa escaped all the atrocities of Vietnam War and had the fortune to study in the former USSR and the US. She came back to Vietnam in 1994 and since then has been trying to bring new ideas to help rebuild her country.