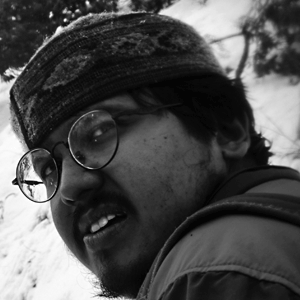 Chandan studied Philosophy at St. Stephen’s College, Delhi (2009). Themes of beauty, imitation and abandonment interest him as a photographer.

He won the India Habitat Centre Fellowship for Photography in 2011, Oslo University Scholarship to participate in Chobi Mela in 2012, Neel Dongre Award in Photography in 2013 and the Foto Visura Spotlight Grant in 2014. He was also nominated for the Prix Pictet Award in 2015 and the Joop Swart Masterclass in 2016.

His artist book, ‘This World of Dew’, published by PHOTOINK, was released in 2015 and went on to garner much critical acclaim. ‘This World of Dew’ has been shown at the Benaki Museum, Athens and Parc Des Ateliers, Arles. He currently teaches at the Sri Aurobindo Centre for Arts & Communications, Delhi