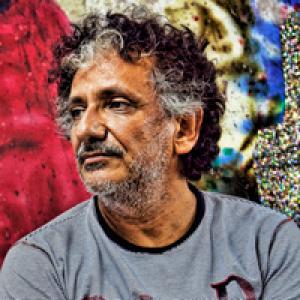 One of the most internationally well-known Turkish artists, Bedri Baykam was born in 1957, in Ankara. His father Dr. Suphi Baykam was a famous deputy in the Turkish parliament and his mother Mutahhar Baykam an architect-engineer. He started to paint when he was only two years old, and has had several exhibitions since the age of six in Bern, Geneva, New York, Washington, London, Rome, Munich, Stockholm, etc. during his childhood years, when he was known as a child prodigy, (wunderkind) throughout the world. Baykam also won prestigious titles as a tennis player throughout the 70s at Turkish Championships.

He studied at the Sorbonne University in Paris from 1975 to 1980 and got an MBA degree. During this time, he also studied drama in L’Actorat, Paris. He lived in California during the years 1980-1987, studied at the California College of Arts and Crafts, in Oakland between (1980-1983). He had several shows in New York, California and Europe in the 80’s. He returned to Turkey in 1987 and has been living in Istanbul since.

He has had 117 one-man-shows in various countries in addition to participating in numerous group shows. One of his most well-known books, Monkey’s Right to Paint, brings to light the rights of non-western artists and severely criticizes the one sided prejudiced attitude of the western art establishment that keeps building a one sided, all western art-history. Baykam is also the writer of a controversial bestseller The Bone, published in December 2000. A turn of the Century novel around sex, death, philosophy, technology and spying, The Bone predicted the events of September 11, ten months before it happened in full details!

Baykam is one of the pioneers of the New-Expressionism movement and of multi-media and photo-painting oriented political art as well as “4-D lenticular works that he has been exhibiting worldwide in the last five years. Since the beginning of the 80’s, he directed several 16 mm. films and has acted in several parts in feature films in Turkey as an actor. He is the author of 23 books.

Baykam has been working actively for several institutions as a political activist, taking the defense of Turkey as a secular democratic country respecting fully human rights. He has been one of the main spokesmen of the Kemalist movement in the last decades, and has been writing in the leftist-democratic daily Cumhuriyet. He is one of the central characters of the tormented Turkish intellectual and political milieu since the 80’s. Besides being a political activist struggling for democracy, human rights and peace, Baykam was a candidate for the Presidency of the Turkish social-democrat Party CHP in 2003 after being a Party Assembly Member in the 90’s.

Baykam is the founder of the production and publishing company Piramid and Piramid Art Center. Located in the heart of Istanbul, Piramid hosts several shows and daring panel discussions year round.

PERSONAL JOURNEY: This year at the General Assembly of world art associations in Guadalajara, as the Turkish Committee we suggested that Leonardo’s birthday became “world art day”. It was accepted unanimously. Coming back from Mexico, we celebrated that enthusiastically. A week later, I was attacked and stabbed on April 18… I almost died and the killer missed my main blood artery by two milimetera. My surgeon had miraculously befriended me a month ago at the LA Airport and he happened to save my life! He said, “This is your second birthday”. It did change the way I look at daily life and even the hours in a day.