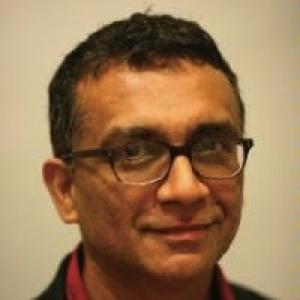 Anil Ananthaswamy is a consultant for New Scientist in London. He has worked at the magazine in various capacities since 2000, most recently as deputy news editor. He has also contributed to National Geographic News and The Independent (UK). He studied electronics,electrical and computer engineering at the Indian Institute of Technology, Madras (Bachelor of Technology), and the University of Washington, Seattle (Master of Science), and worked as a software engineer in Silicon Valley before training as a journalist at the University of California Santa Cruz. He is the author of The Edge of Physics, published by Houghton Mifflin Harcourt (published as The Edge of Reason by Penguin, India).

Anil attributes his interest in cosmology to a thin, dog-eared copy of Lincoln Barnett’s The Universe and Dr. Einstein, which he picked up one night as a cure for insomnia, only to read it by early morning, entranced by Einstein.

BOOKS: The Edge of Physics